The literal meaning of Al-Baqi is a tree garden and it’s also known as Baqi Al Gharqad. Holy Prophet’s relatives, companions and friends are buried in it and that’s why it’s named Jannat al Baqi due to its sacredness. This well-known cemetery is located in Madinah, Saudi Arabia southeast of Masjid al-Nabawi. Whenever the Prophet (SAW) used to pass this cemetery. He used to pray.

The history of Al-Baqi goes back to the time when our beloved Prophet (SAW) was migrating to Madinah. Uthman Ibn Madhoon (may Allah be pleased with him) was the first companion who got buried in this cemetery. Prophet Muhammad (SAW) ordered his companions to shed some trees and Uthman ibn Madhoon was buried in the center of the trees. The second one to get buried in this blessed place was Prophet’s son Ibrahim. He was a newborn baby boy and on his death, Prophet (SAW) was observed to be bitterly sorrowful. After that common people of Madinah started burying their relatives in al-Baqi as Prophet (SAW) used to pray for the people who were buried there. 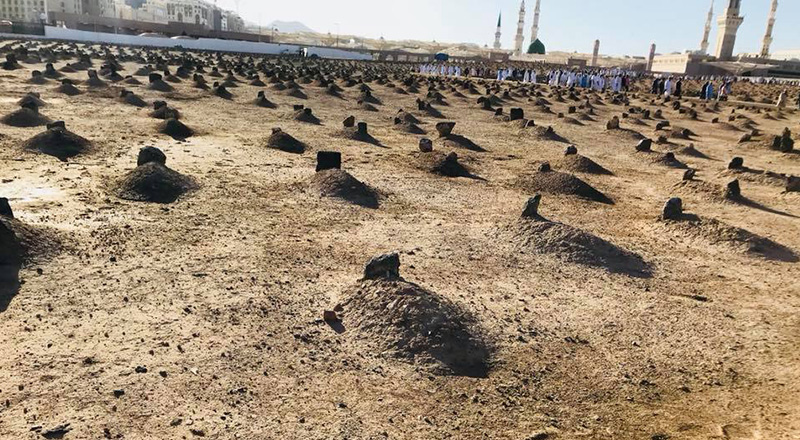 As the time passed this cemetery was extended. This place has great historical significance as Ahlul Bayt and 7000 companions of Prophet (SAW) are buried there. Let’s have a look on a list of people buried in Jannat al Baqi:

This blessed land was further renovated but after the rise of Wahabis. It was demolished in 1806. In 1925 Ibn Saud demolished Al-Baqi. Jannat al Baqi is also known as Garden of heaven and many structures and homes were built here. Wahabis consider it un Islamic to visit graves and domes and decorate them. That’s why they demolished the well-constructed domes and structures. King Ibn Saud issued the orders of demolition when he observed that common people are seeking the help of dead. Some Scholars render these actions as a conspiracy.  They state that the purpose behind the demolition of graves was to eliminate Islamic history and heritage.