Planning for an Executive Hajj with multiple sight-seeing options? We have gathered information of some rare and worth-visiting Holy places of Makkah and Madinah; that will fill your sacred journey with blissful memories of a lifetime. 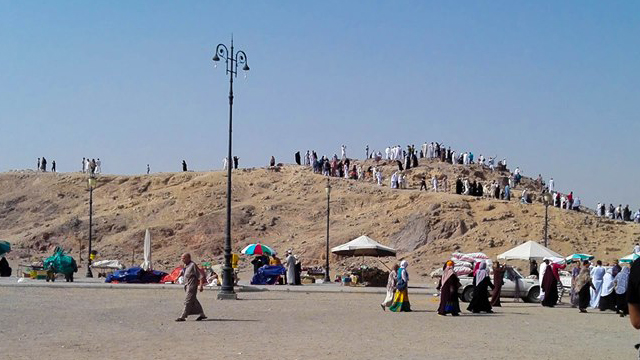 Ziyarat in Makkah – Makkah is the nucleus of the Islamic world and can be perfectly portrayed as the capital of Islam.  This urban area is the place where our father Ibrahim AS came with his family and later built the most sanctified of places in the world, Holy Kaabah.  Every Muslim on the face of the earth is religiously and emotionally to Makkah. While Madinah is the place whose soil has the honor of having the footprints of Allah’s Apostle ﷺ, and it is the resting place of him.

Where are Madinah and Makkah?

Makkah and Madinah are blessed cities have scores of beautiful and historic sites. Some of them are mentioned below:

The place where first divine revelation was received by Holy Prophet Muhammad ﷺ is Jabal Noor which is situated around three miles from Makkah. Inside this mountain, Cave Hira is situated where beloved Prophet Muhammad ﷺ used to retire in solitude worshipping Allah ﷻ. This cave is about 12 feet in length and 5 feet three inches wide. It takes around 600 steps to reach Cave Hira.

This rocky and barren mountain lie south of Makkah which contains Thour cave. The significance of this cave is due to the incident in which Prophet Muhammad ﷺ and Abu Bakr Siddique hid from Quraysh tribe and spent three days here. A dove made a nest and laid eggs on the entrance of this cave. Muslims considered Thour cave as the sign of faith and hope.

Kiswa is the beautifully woven and embroidered black cloth that is draped around Holy Kaabah. This cloth is manufactured each year in Al Kiswa factory. Dyeing, weaving, designing, printing, embroidering and assembly of Kiswa all takes place in this factory. It is situated on the old Makkah Jeddah road.

A mysterious and miraculous valley, also known as Wadi Al Baida is located around 24 kilometers from Madinah. It got its name due to several stories linked with this valley. In this unique valley, the vehicle ascends on its own in neutral gear due to magnetic forces present in surrounding hills. Thousands of people visit this unique valley annually.

This is a famous historical site due to its uniqueness amongst mosques. Masjid Al Qiblatayn is also known as the mosque of two qiblas. It is the place where beloved Prophet Muhammad ﷺ was ordered by Allah ﷻ to change the qibla from Jerusalem towards Makkah. This change of qibla took place when Prophet Muhammad ﷺ and his followers were offering prayer. As a 1400-year-old mosque, Masjid Qiblatayn has a very austere pattern.  It is located in Madinah.

Mosque Zarrar was built by hypocrites for the purpose of disuniting Muslims and causing harm to the true followers of Islam. This is the only mosque destroyed and burnt by Prophet Muhammad PBUH. Its ruins are still present to see and learn a lesson from it. This site is located near Mosque Quba.