Seek the help of Almighty Allah

Human beings cannot remain happy forever. There are certain times when nature decides to test our patience and leaves us bewildered and perplexed. This is the time when Muslims take advantage of their faith and seek the help of Almighty Allah.

In Quran, Allah says: “He is the One that has created Life and Death in order to test who amongst you is best in conduct.” (Verses: 67:2)

Favorable conditions demand us to be humble and thankful to Allah, and unfavorable situations necessitate us to remain patient and ask Allah for help. 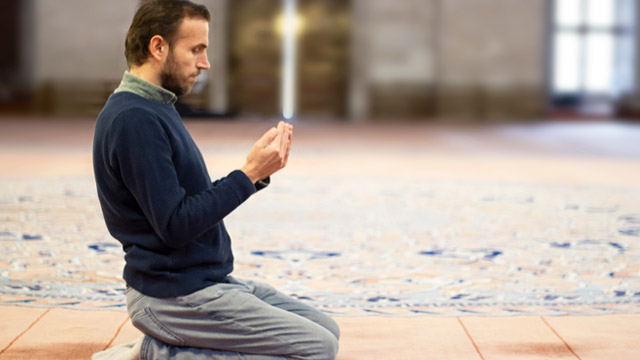 As Muslims our believe rests in the fact that whatever is happening in our life is with the Will of Allah. Good and bad times are from Allah and Muslims should exhibit the best of their faith in both the cases.

It is mentioned in the holy Quran:  “Verily we will test you with some fear, hunger, and loss of wealth, life or the fruits (of your labor.” (Verses, 2:155)

The strongest weapon that every Muslim has against adversity is Dua (supplication). When you feel hopeless and feel that the world has shut all doors of happiness for you, you know that there is always a source awaiting your call and willing to help you.  Currently, most of the Muslim countries are under attack, however, the only thing that keeps them going is the firm faith in Allah and the belief that their Duas will be accepted one day.

It is mentioned in a Hadith that when the Messenger of Allah (PBUH) came across a community through a tribulation, he advised, “Why don’t they supplicate (make dua) to Allah for assistance?”

It is mentioned in another Hadith that Dua has the ability to alter destiny.

The power of Dua can be realized by recalling the incident of Prophet Nuh (AS). It is mentioned in the Quran:  “The people of Noah denied and they belied Our Servant and said, ‘He is a madman’ and threatened him. He therefore supplicated (through dua) to his Lord (saying), ‘I am overpowered! Assist me?’ We therefore opened the gates of Heaven, with water flowing furiously. (And) We caused springs to gush out from the earth, so that the two waters met in a quantity that had been destined.” (Qur’an, 54: 9-12)

The future of Islam went under jeopardy at the time of Badar, when just 313 ill equipped Muslims had to face the army of 1000 well armed enemies. The prophet Muhammad (PBUH) spent the entire night on the eve of Badar battle supplicating/ making prayers seeking Allah’s guidance and assistance. On the day of battle, Allah granted the greatest yet incomprehensible victory to the Muslims.

This is the power of Dua, if made wholeheartedly, with sincerity, and believe in Allah. It is been rightly referred by scholars as the ‘weapon’ of a believer.

It is mentioned in Musnad Ahmed and Tirmidhi that ‘Dua is the essence of worship.’

Dua is the best form of Abdiya that means that a person is totally dependent on Allah. It includes the belief that ever thing good or bad, favorable or unfavorable, happy or sad, sickness or health lies in the hands of Allah alone and He makes things happen. He decides whom to bless and whom to test and only He can help.

Allah mentions in Quran:  “O mankind! It is you who stand as beggars in your relation to Allah, and it is Allah Who is Free of all wants, Worthy of all praise.” (Verses, 35:15)

As Muslims, we should never give up, because we have the ultimate weapon to counter our fears, depression, oppression and adversity in the shape of Dua.

Pray in the land of Muhammad (PBUH) and perform Hajj 2021 only through Dawn Travels.