Manasik Umrah – The Umrah starts with wearing Ihram and making the Niyyah for Umrah at the time of crossing the prescribed Miqat point.

The Ihram for gents is simple two piece unstitched garment. During the Manasik Umrah, a person can change Ihram many times, but it is mandatory for them to remain in it till the time the Umrah is completed.

The Ihram for women is the full dress that they wear daily. But a particular dress must be separated and classified as her Ihram.

Anas bin Maalik (RA) said, “The pilgrims and those who perform Umrah are the delegation of Allah. He will give them whatever they ask for, answer their supplications and He will give them better than what they spend. Every Dirham will be multiplied by a thousand.” (Baihaqi) 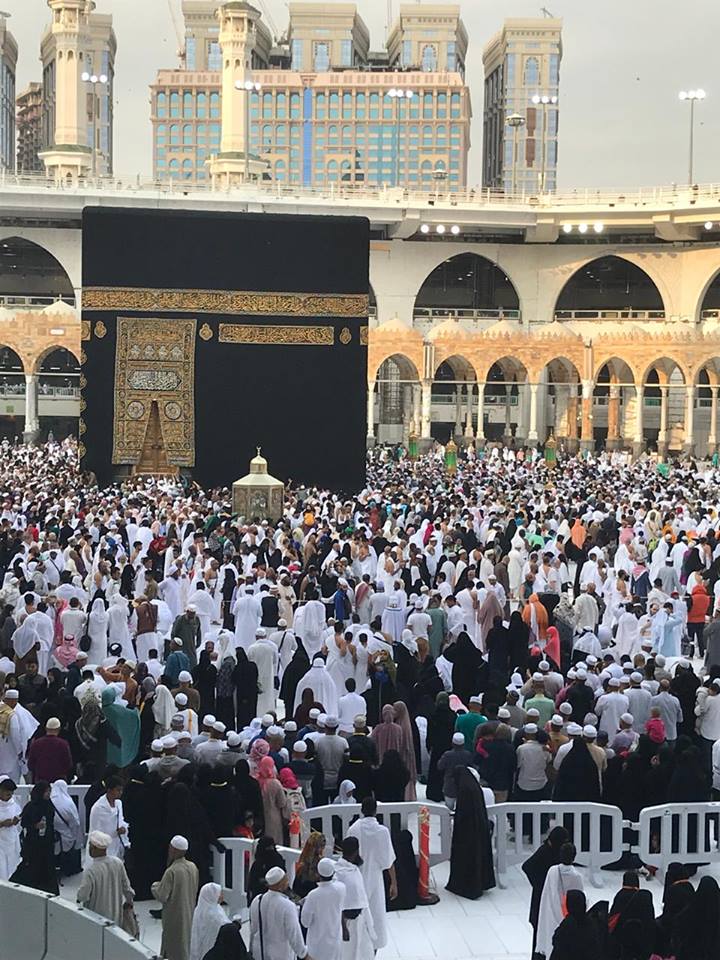 The Miqat points are different for different countries.  Generally, the airlines such as PIA, Saudi Airlines, and Emirates announce the point of Miqat way before the plane crosses it, so that a person can wear Ihram and do the Niyyat. An individual is supposed to perform 2 Rakaat Nafil Salah. After performing Salah, one should make the intention for Manasik Umrah. People who are leaving for Umrah are also permitted to wear Ihram and perform Salah before boarding the plane and they can also make the Niyyat before reaching the point of Miqat.

One should perform Wuhdu or Ghusl on reaching Makkah.

Women are supposed to keep their face uncovered but their ‘satar’ covered during the Manasik Umrah.

When one enters the Masjid and sees Kaabah, he/ she should stand aside facing the Kaabah and make all the supplications that one ever wanted to make. One should also make supplications on behalf of people (friends / family / relatives) who had requested them to do so.  While making the supplications/ Duas one should not forget about the deceased people and should pray for the entire Muslim Ummah and the world in general.

One should make the niyyah for Tawaaf for Umrah before starting the Tawaaf. It could be easily done by standing before the Kabaah, away from the crowd.

When men are about to step into Masjid al Haram, they should adopt Iztiba.  The act of Iztiba is to keep the right shoulder bare. One should keep in mind that the shoulder should remain covered during Salah.

Begin from where you can see or locate the Black Stone (Hajr Aswad. One is supposed to raise their hands up to shoulder level and recite “Bismillah e Allaho Akbar”. After that, perform Istilaam. Istilaam is performed either by kissing the Black Stone or by directing palms on the Black Stone.

For starting the Tawaaf, turn to your right side and begin Tawaaf in an anti-clockwise direction. Bear in mind that the Kaabah should always be on your left. Do not stop while performing Tawaad and do not push others. It is also important not to face the Kaabah until you are performing Istilaam.

The first three rounds are done with pace but without running by men. This step is known as Ramal. Every time one passes by Rukn Yamani corner, without stopping, one should reach out and touch the corner. But, this stays impossible because of the crowd and people tend to remain stuck to that corner for a while. In such a case one should keep walking without raising his/ her hand at this corner. There are people who raise their hands but it is not required. Take seven rounds of Kaabah in such a manner and the Tawaaf is over.

If the venue is not packed with people, behind the Maqam-e-Ibrahim, locate a suitable place and offer the two rakkat Nifil Salah for Tawaaf. In case if the place is crowded, move away from that place but remain in that location and offer the Nafil Salah. If the place is overcrowded then offer Nafil Salah anywhere one finds space in the Masjid.

Before drinking ZamZam water make Niyyah by reciting the supplication that “the water is the source to quenching the thirst that will occur on the Day of Judgment, be the cure for all bodily ailments and a source to overcoming one’s hunger.” Drink plenty of ZamZam water.  After drinking the water one can recite:

“O Allah, I seek beneficial knowledge, wide sustenance and cure from all ailments from You”.

After this, move to the hill of Safa, face the Kabaah and make Niyyah for Sai. Sai is the seven trips made between the hills of Safa and Marwa. One can make the remaining Duas/ supplications that one may have.

After this men go to barbers to have a haircut or to get their head shaved (Taqseer or Halaq). It is suggested to have Halaq rather than Taqseer. The women are supposed to cut a wrapping of strand of hair around two fingers. It is not at all permitted to cut the hair at the hill of Marwa, although one might see many women doing that. One should keep in mind that the masjid is called MASJID AL HARAM. It is impermissible (Haram) for anyone to cut the hair inside the Masjid while one is in Ihram.