The Blessed Door of Kaabah

Every religion in the world has certain holy and sacred shrines and sites that have a special association with the supernatural. Jews take Jerusalem as their most sacred site. Christian community considers shrines belonging to saints as holy and wish to receive goodwill from their God in the form of healing and blessing. Muslims have their own holy site that stands out and coincides with their faith called Kaabah. There is simply no other site on this globe that is as central and celebrated as the holy Kaabah.

The Holy Kaabah is the epicenter of Makkah and millions of homes are adorned with the picture of this well-known and most beloved real estate. Just like this most sacred site in the world the door of this cubic building holds lots of significance and interesting history. Let’s discuss some important facts about the entrance of this masterpiece; the door of Kaabah.

The original and ancient Kaabah used to have two doors; one for entrance and the other one for exit. There was one window as well which was situated at one wall of the holy Kaabah. Now the Kaabah of our times consists of one door and no window. 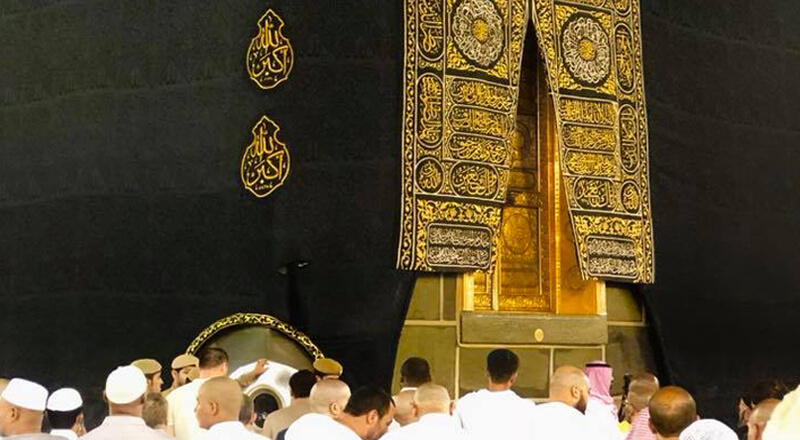 The keys of the door of Kaabah

During the time of our beloved Prophet Muhammad PBUH, the rites of the Hajj was distributed in different sub-groups of Quraish. These families used to help in the performance of different rituals of Hajj. Eventually, the families lose the guardianship of the different rites. Only one particular rite was left which has to do with the keys of the door of Makkah. At the historical event of the conquest of the city of Makkah, the leader of all Prophets, Muhammad PBUH was given the keys to the Kaabah. Instead of keeping those keys He PBUH returned them back to Usman bin Talha who belonged to Bani Shaiba family. This family is the traditional key keepers for centuries and it still holds this right. Prophet Muhammad PBUH confirmed this sacred responsibility to the family of Usman bin Talha in the following words:

Now even the strongest King or Caliph in the world needs the permission of this small family in Makkah to open the doors of Kaabah.

Kaabah door used to be open for Public

The door of the Kaabah used to be open for the general public twice a week until recently and the lucky ones used to enter and say their prayers and wish to Almighty Allah. Yet due to the increasing amount of pilgrims every year the door of Kaabah is opened twice in a year for exclusive guests and dignitaries only.

The old and the new Door

In the era of Prince Sharif Massoud Idrees bin Hassan, the city of Makkah suffered from heavy flood. The northern wall, as well as the eastern wall holding the door of Kaabah, was seriously affected. This caused the removal of the old door of Kaabah and Sultan Murad IV ordered a new door to be designed by Egyptian Engineers. Metals like silver and Benedict gold was used to resist climatic factors that caused the door of the Kaabah to survive for four centuries.

The door of the Kaabah is changed twice during the reign of Saudi Kings and the current door is made of 280 kgs of pure gold.